NetEnt continues to expand its collection of branded slots. Street Fighter 2: The World Warrior is an addition to their series of slots that the developer first released in 1991.

Just like in the video game, this slot plays out in battles and to get the reels spinning you must pick your Street Fighter before randomly being given an opponent to fight. If you manage to get your opponent’s health points down to zero as you spin, you’ll move onto the next fighter!

This series was a big hit then, and even with this new addition, the theme seems to captivate players as well.

If you were able to play the older version, then you will enjoy this latest release more.

The slot game is set up on 5x5 reels, and it depends on the Cluster Pays system. With this system, you will need a combination of 4+ matching symbols to form a group.

For its features, you will get 2X2 Colossal Symbols, Wild Gauge, Free Spins, 8 modifiers (comes from the characters that you pick), and a bonus game.

Street Fighter 2 relies heavily on its wild symbols. For the regular symbols, clusters can pay as much as 30x the stake at most.

However, you can boost your rewards by using the additional multipliers that are available when you are in free spins mode.

NetEnt has offered an RTP of 96.06% for this new release which is the average that is available on most modern slots.

To get started, you will be required to pick a fighter; this is from the 8 that were in the original game.

Every fighter has a different modifier, and this way, the wild symbols can appear in different ways. This means that you can expect to see wilds coming from in all shapes, where they might appear in random locations, or on the same row or reel.

Additionally, these wild symbols can either be stacked vertically or horizontally. You can expect to get between 1 and 7 wilds, but this largely depends on the character.

Then there is the Wild Gauge, a type of meter available for each of those characters. This meter will get filled as you continue creating clusters that have high-value symbols. If you manage to fill the meter, you will be offered a modifier of each character.

To trigger the free spins, you need to win in the battles. These appear as a feature called, Beat the Boss. If you are defeated, the feature ends, but if you win, you go to the next level. Each level comes with an increased multiplier.

Street Fighter II is an oldie and this is noticeable from the theme and design it has used. The newer version is based on an arcade game that hit the scene in 1991. The slot has a look of yesteryears, but this is normal for a branded slot game.

For the symbols, there are 8-bit style Royals, as well as some images of the fighters that appear in versions of both a winner and a loser.

Street Fighter 2: The World Warrior is quite promising. I love the RTP and great design that has been used on this modern version.

If you have fond memories of the original slot, you will enjoy this newer version the more.

It isn’t a stretch to say that through the spanking new Street Fighter II slot game, Net Entertainment has effortlessly repainted what our basic thought of a slot is. Every aspect of the game feels like a familiar experience made a lot more exciting. There’s no doubt that this is the slot machine game that we’ve all been waiting for.

For starters, the Street Fighter II slot machine is coined off of the original version of a similarly named video game which was released back in 1991. The original video game was a massive hit, and anyone who played the game will agree that it ushered the world into a new age of video gaming. On top of embodying the smash-hit video game on the reels, Net Entertainment took things to the next level and introduced a host of interactive features in a 5×5 arrangement with cluster pays. Keep reading to find out how you can fight your way up to the boss to become the new street fighting champions.

Apart from choosing your champion, you must also select your betting range from a minimum of 20c up to the to $700 per spin. After that, the character jets off to a random part of the world to commence their first battle as is the case in the original Street Fighter II video game. Unlike what you’d find in other cookie-cutter slot machines, here, winning combinations come to life for every 4 icons that you match either horizontally or vertically, which can also trigger an avalanche feature thanks to the cluster pays mechanism.

The traditional Street Fighter video game characters that you’ll be super-psyched to encounter in the game include Dhalsim, E. Honda, Ryu, Guile, Zangief, Chun Li, Blanka, and Ken. Other than these characters representing high paying icons in the Street Fighter II casino slot machines, each one brings a different moderator with it.

Bear in mind, however, that only four of the theme-based characters will earn you significant payouts. 2 of these icons are defeat versions, and the other 2 are victory versions which can pay up to 30x for an appearance of 16 or more. Victory and defeat symbols can also show up in 2by2 icons that take up four times the usual space on the greed for colossal wins. When a combination of top paying symbols activates, the fighters go head to head in a fight until the life bar of one of them is reduced to zero. Low paying symbols, on the flip side, are the usual J-A card game royals. 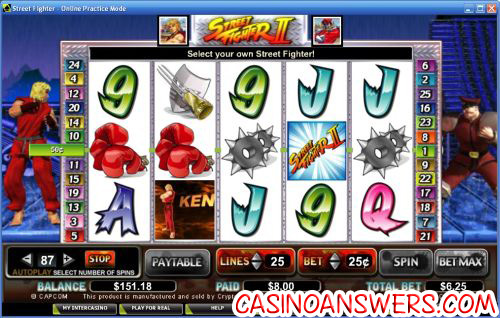 Before we jump into the features of the free Street Fighter II slot, you should know that the RTP varies from 96.02% -96.08%, depending on the fighter. Well, whichever character you go with, the chances of making a profit are pretty high. Moreover, RTP is not the only component that varies, volatility also changes from medium to high, depending on the fighter you choose.

Moving on to the features available in the Street Fighter II free slot machine,here’s what you should expect:

Every high paying character is equipped with a Wild Gauge full at one point in a winning cluster. If there are no more winners on screen but only 7 points on the Wild Gauge, the character’s modifier becomes active. As it is the norm, Wilds have the power to replace all other symbols in the game.

Every fight round comes with two outcomes: a win or a loss. If the player loses, then the Car Smash Bonus game is activated. At this point, players can either move to start smashing a car or click the ‘Quick Finish’ tab to be the winner of anything from 5 to 15x their initial bets. After doing that, you can choose to stay with the same character or choose a different one for a fresh battle.

If your character wins the fight, then the Beat the Boss Free Spins are immediately activated. At this point, the rules are similar to the ones in the base game, except for the boss levels which come with win multipliers. There isn’t a definitive set of free spins; instead, the bonus game keeps on going till someone succumbs to a loss.

There are four bosses to be defeated, they are Balrog (x2 multiplier), M. Bison (x10 multiplier), Vega (x3 multiplier), and Sagat (x5 multiplier). If you are tough enough to beat all the bosses, then you walk away with a cool 100x your stake for being undefeated in the whole tournament.

You’ll encounter one of the most interesting twists in this Street Fighter II free slots when you lose to a boss. After losing, you get another shot at beating the boss by going through the Insert the Coin gamble feature. However, you can only use the feature once for each Beat the Boss Free Spins round. You should also know that you’ll have to give up a share of your winnings to get another run at the Boss Fight. In case letting go of a part of your payout is a big concern, then perhaps the advantage of playing with a much higher RTP configuration of between 98.7% to 100% will make it worthwhile.

Just like practically all NetEnt slot machines, this exceptional title comes with two distinct gaming modes that players can switch to. You can play free Street Fighter II slotsin the demo mode, without spending a dime just to have fun. After you have had your fun and understood how the game works in the free slots no download no registrationversion, you can switch to the real money mode for a chance to earn some real money payouts. Apart from desktop computers, the game is also available on mobile devices.

NetEnt is well-known for crafting some of the best slot machines in today’s iGaming market. While the developer often boasts of being a top proprietor of crisp 3D graphics, and lifelike gameplay in titles like Gonzo’s Quest, Dead or Alive and Jack and the Beanstalk, the new Street Fighter II slotis different.

The title is all about the nostalgia of reliving the action that came with the original Street Fighter II video game. While the interface mimics the 8-bit graphics used in the 90’s video games, it’s not your traditional classic slot that comes with the same old arrangement. Here you get a 5 by 5 grid with cluster pays that promise bountiful rewards and host of randomly unlockable power-ups to supercharge the level of entertainment in the game! Relive the glory of your golden childhood memories in this heavy hitter!

📌 Are there any free spins available in the Street Fighter II game?

Yes, you can unlock free spins in the Street Fighter II slot if your character wins the duel. 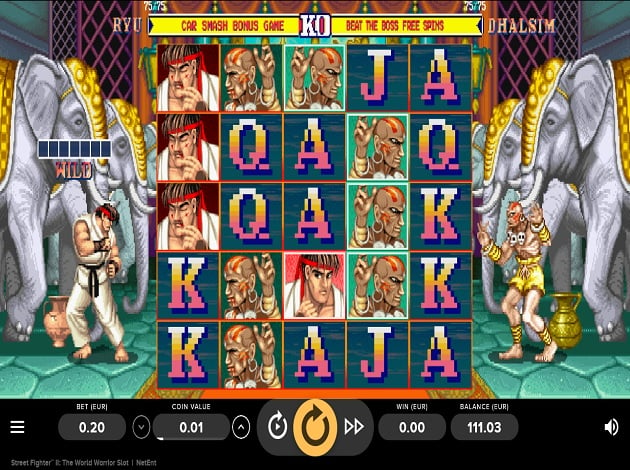 You can enjoy the game for free right here on our platform with no download and no registration needed.

📌 Can I get free coins when I play pop slots like Street Fighter 2 slot machine?

Yes, there are free coins available for you in the demo mode variant of the slot.

📌 What are the best free online slots from NetEnt?

NetEnt is a game provider that has created more than 200 innovative casino games for 20 years. It also boasts the slots with the highest RTP rates, up to 98%. Some of its top slots are Starburst, Narcos, Mega Joker, Berry Burst, Planet of the Apes, and many more.