Beer and boobs – need I say more? The Bier Haus slot machine from WMS is based on Oktoberfest which is the world’s largest Volkfest (beer festival and travelling funfair) that is held annually in Munich, Germany. Dating all the way back to 1810 when it became a tradition amongst Bavarians, the event lasts for 16 days, ending on the first weekend in October, and never fails to attract millions of people from all walks of life. While many countries have tried to replicate the event, nobody does it quite like the Germans!

Played across 5 reels with 40 paylines this online version of Bier Haus has the same structure as its popular land-based counterpart that can be found dotted around casinos in Las Vegas and Europe, with the same popular free spins mode featuring too!

Bier Haus is an online slots game well-suited to those who like betting in the midrange category. It’s nice for novice players, as the bonus features are straightforward.

Like VegasSlots.co.uk:
Casino of the year 2021Read Casino Review

Bier Haus boasts a very generous 96% return to player percentage (check out our slots glossary if you’re unsure what that means) therefore even if you’re playing drunk late at night your money is going to last longer playing Bier Haus than the majority of online slots, plus the staking options available in real money mode make it accessible to players of all bankroll levels. With bet per line values ranging from only 1p up to £5 per payline, this means spinning with all paylines active will cost you a minimum of 40p and a maximum of £200.

Lots of Beer and Big Busts

The reels are a picture of joyfulness with symbols relating to the fun that is had every year at Oktoberfest. To begin with the Wild symbol is three overflowing jugs of beer and this symbol can substitute for all others apart from the feature and Gold feature symbols which are represented by a very busty blonde beer girl and required for the free spins mode.

A jovial moustached Bavarian beer drinker also appears with a smile beaming across his face and he is the highest valued symbol as five on one payline pays out 12.5x your stake. A castle, beer barrel, beer stein, accordion, acorns with oak leaves, and standard poker suit symbols (pink diamond, purple club, red heart, and blue space) also make an appearance in this colourful slot that is sure to get you in beer festival mode all year round – any excuse hey?

While the prospect of triggering a free spins mode only to be rewarded with 5 free spins may disappoint many of you there is actually plenty of opportunity for large wins here, plus you can retrigger the feature for up to 80 additional free spins – and while that’s a far cry from the maximum of 240 free spins in IGT’s Siberian Storm slot machine, it will still see you dance jovially around your house as if you’re at the festival!

Saying that, they were very rewarding as all Gold feature symbols that trigger the feature are transformed into Locked Wilds and remain in place until your free spins have finished playing out – which always produces many winning combinations and proves very rewarding when you manage to retrigger additional spins. Poker set price. 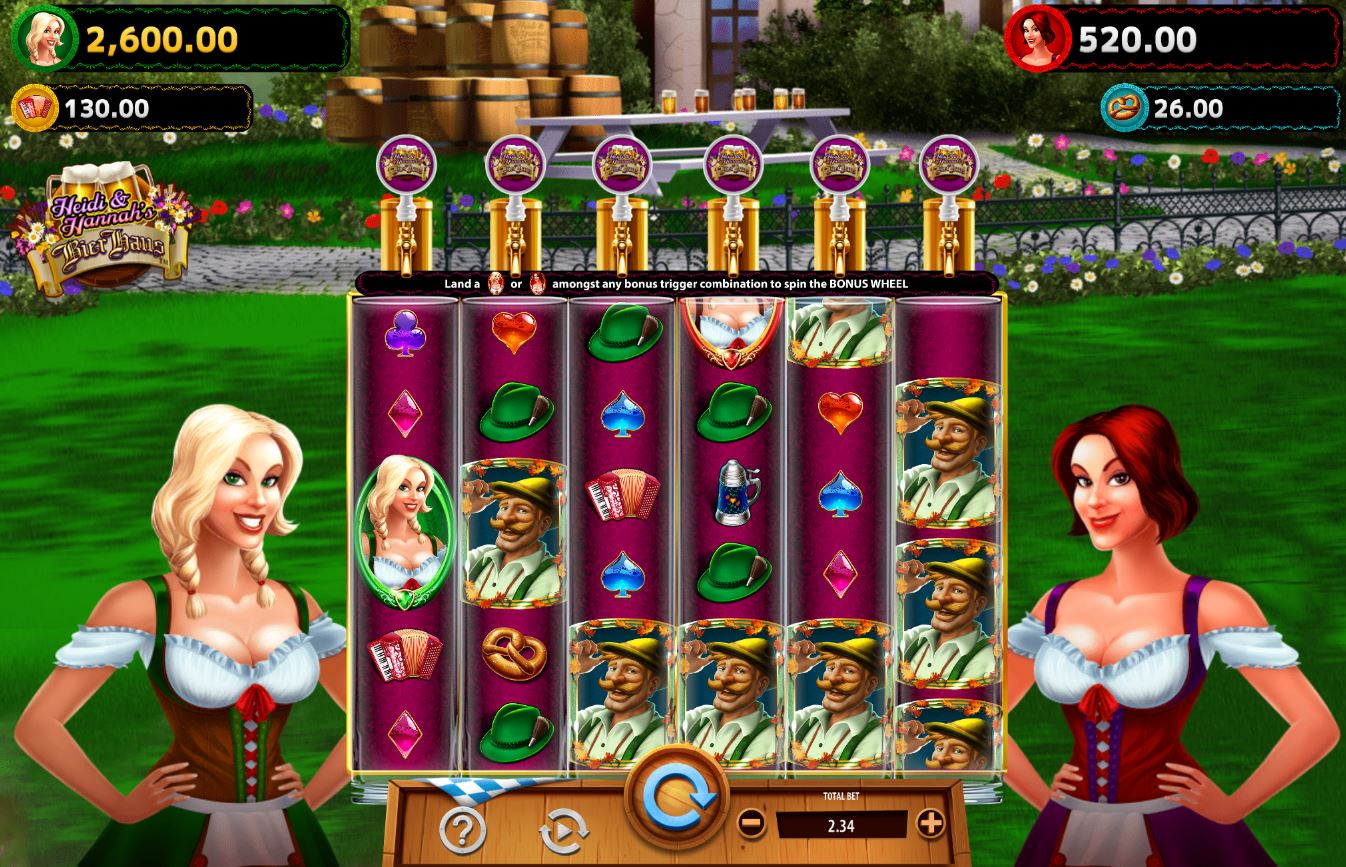 As you’d expect from an online slot based on Oktoberfest, Bier Haus is a fun-filled slot that can be played at online casinos that offer WMS slots. The symbols portray the fun beer drinking and dancing to music that is had each year, though it’s probably the busty beer girl symbols that will capture your attention more than a beer barrel!

While it’s a great theme I found it very disappointing that there is only a free spins mode as the theme lends itself to other fun features such as clicking different beer jugs in a pick ‘em feature and so on which would have made it much more enjoyable to play.

There is no getting away from the beer in this game, with symbols depicting ‘Steins’ (large glasses) of beer, the bar sign, barmaids holding more beer and a caricature German guy with a huge moustache holding a beer of his own. There is a Bavarian ‘fairy tale’ castle too, and some red leaves with an acorn – which signify October, the time when the famous beer festival takes place.

There are 40 win lines, and you can bet from just 1c per line up to $1 – making the spin range 40c through to $40. With many of the symbols stacked on the reels, you will often get multiple wins at the same time. The biggest standard prize comes from the cheerful German guy; this is worth 500 coins for 5 on a line. The castle comes next, worth 150 coins for 5, with the Bier sign worth 125. My experience was of plenty of smaller wins, coming from the acorns, accordion and the playing card suits – the bigger wins come from the bonus games.

The symbol you’ll want to see a lot of is the delicious looking stein of beer. This is the wild symbol and will substitute for any of the other regular symbols to make winning combinations. With many of the symbols stacked in this game (including the steins of beer), you will have occasions where you hit 5+ win lines at the same time.